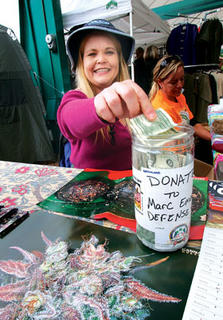 While 4,000 people gathered in Caras Park Sept. 10 to support industrial hemp at Missoula’s Hempfest, worldwide Smoke Out America protests calling for an end to the U.S. drug war drew thousands more. One protest, at the U.S. Consulate in Vancouver, British Columbia, had special urgency and a special guest. Marc Emery, aka “the Prince of Pot” who founded the British Columbia Marijuana Party [BCMP] as well as Cannabis Culture magazine and Internet-based Pot TV, showed up to rally for his own cause.

At the request of the U.S. government, Emery and two of his employees—Greg Williams and Michelle Rainey-Fenkarek—were arrested July 29 by Canadian police on U.S. charges of conspiring to distribute marijuana and marijuana seeds and money laundering. The charges stem from Emery’s marijuana seed-selling business, Mark Emery Direct Seeds, reputedly the world’s largest marijuana seed business, which had been in business for nearly a decade. According to the Drug Enforcement Agency, an 18-month investigation traced Emery’s seeds to busted growing operations in nine states, including Montana, and the charges seek to hold the defendants responsible for those plants. The process of extraditing the “B.C. Three” is underway and each of the three charges could carry penalties of 10 years to life in prison. While Emery and his lawyer, John Conroy, are hopeful they can fight extradition successfully, they’re also nervous because Canada and the United States have a long history of granting one another’s requests.

Still, many factors besides Emery’s alleged crimes feed into the issue—Canadian sovereignty and political persecution, to name two. Although selling seeds is technically illegal in Canada, the government there has deliberately ignored Emery’s business—and dozens of similar ones—for several years, Emery says. Since 1999 he’s paid $578,000 in income taxes openly generated by the seed business, Emery claims, and the Canadian health department even referred medical marijuana patients seeking seeds to his website.

“I’ve been selling seeds untouched for seven years, every day of my life,” says Emery, who’s out on bail. “Seeds have become so acceptable here, and the last time anyone was fined it was like a $500 fine in 2000.”

He says he was surprised to find that the charges came from the States. Emery hasn’t left his home country in eight years because he knows the DEA might arrest him overseas, but he figured he was safe in Canada.

Conroy says the fact that Canadian citizens may be harshly punished for something their own government chooses to ignore irks Canadians. A poll by the Canadian newspaper Globe and Mail backs that claim, showing that a majority of Canadians oppose extraditing Emery, and their interviews reveal concerns about Canadian sovereignty as well as the disparity between how Canadians and Americans enforce and sentence marijuana crimes.

Conroy says the main argument in Emery’s favor is that the U.S. prosecution is politically motivated. Though DEA agents paint Emery as a greedy drug trafficker, Emery says he’s dedicated the last 15 years to the cause of marijuana legalization and has donated all business proceeds—$4 million—to the movement and its activists, both in Canada and the United States.

A statement issued by DEA Administrator Karen Tandy the day of Emery’s arrest goes a long way toward showing the true aims of U.S. prosecutors, Emery and Conroy say.

“That’s revealing,” says Emery. “It mentions the movement in four places. The whole thing is about politics…There are dozens and dozens of seed distributors in Canada but I’m the only one who’s a political activist.”

Though the timing of Missoula’s Hempfest in relation to Smoke Out America was a coincidence, according to organizer John Masterson, the Caras Park appearance of U.S. Marijuana Party founder Loretta Nall was not. Nall, who’s worked with Emery, Cannabis Culture and Pot TV since 2002, spoke to the crowd about Emery’s case and collected more than $200 in donations for his legal defense.

Kirk Tousaw, the BCMP general counsel who’s coordinating Emery’s legal team, says the extradition process will likely take at least two years, and both the British Columbia Supreme Court and Justice Minister Irwin Cotler would have to approve the surrender of the B.C. Three.

Cotler could deny approval if he believes the crime’s potential punishments would “shock the conscience” or that the prosecution is politically motivated. In addition to the political persecution argument, Conroy will argue before the BC Supreme Court that the disparity between the countries’ sentences is shocking: “In the States it’s 10 to life without parole—up here it’s a fine…The maximum for production up here is seven years for any amount,” he says. “We got rid of a mandatory seven-year minimum for import/export because it was cruel and unusual.”

Tousaw says both Canadians and Americans should call upon Cotler to deny extradition. Emery’s first extradition hearing is Sept. 16.

“It is a unique situation in this sense: We’re talking about nonviolent, nonharmful people who have not set foot in the U.S., whose alleged activities were conducted in the open for political reasons, and who were not impeded in any way by the Canadian government,” Tousaw says.