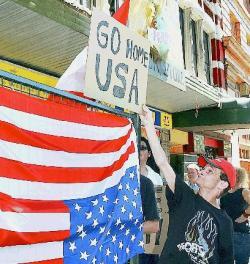 While pot advocate Marc Emery was being arrested in Halifax, his supporters gathered outside his Hasting Street store to protest the U.S.-directed raid on the premises with signs and flags.


Pot advocate Marc Emery was arrested Friday in Halifax after his marijuana-seed shipping business on Hastings Street was shut down by police as part of a sweeping investigation instigated by U.S. authorities.

Emery, 47, referred to as "The Prince of Pot" on the search warrant, was arrested by the RCMP and police in Halifax.

He is charged in the U.S. with several drug-related charges, including conspiring to distribute marijuana seeds and launder money.

Gregory Keith Williams, 50, and Michelle Rainey-Fenkarek, 34, both alleged to be involved in the long-established business, were also arrested in Vancouver on similar charges.

Tempers flared in Vancouver Friday when four protesters were arrested after attempting to block a police van loaded with seized goods from Emery's company, Mark Emery Direct, which is located in a storefront at 307 West Hastings.

The store also houses the office of the B.C. Marijuana Party and Pot-TV.

"I was on the phone and these guys walked in -- they looked like hippies or something -- and they told me to hang the phone up," Bennett said.

"I said, 'What's this all about?' and they said they were the VPD."

Bennett was told to leave the premises while police began their search and seizure.

"They just sent me out," he said. "They didn't even search my body."

The search warrant included all records pertaining to the Marc Emery Direct seed-selling business, including client lists, invoices and employee records from as a far back as September 1995.

Police took down storefront signs and covered the windows with paper, while about 25 chanting protesters banged on makeshift drums outside.

Two American flags were hung upside-down on a nearby fence.

"This is a place where people could pull out a joint and not have to fear being reported to the police, and that was okay with Canadians," said David Malmo-Levine, who was one of the four protesters later arrested.

"It's really an attack on our sovereignty."

The search was requested by the U.S. government through the Mutual Legal Assistance in Criminal Matters Act, a federal law administered by the Department of Justice.

The warrant was authorized Thursday in B.C.'s Supreme Court, based on an affidavit provided by a Vancouver police officer.

U.S. authorities say the warrant was the result of an 18-month investigation of Emery's international seed-selling business.

The investigation involved about 38 DEA offices across the U.S. and allegedly linked marijuana seeds sold by Emery to indoor grow operations in several states, including New Jersey, Michigan and Florida.

Jeff Sullivan, assistant U.S. attorney, alleged Friday during a news conference that more than 75 per cent of the seeds sold by Emery were sold to people in the U.S., and Emery was making about $3 million a year selling seeds and marijuana-growing equipment.

"He is a drug dealer," Sullivan said of Emery, who has been in business since 1994.

"The fact is, marijuana is a very dangerous drug. People don't say that, but right now in America, there are more kids in treatment for addiction to marijuana than every other illegal drug combined."

Sullivan said Emery is facing a maximum sentence of life in prison.

U.S. authorities have requested that Emery remain in custody until extradition proceedings are concluded, but Sullivan conceded it could be many months before Emery actually arrives in the U.S. to face the charges.

"We anticipate that it could be anywhere from six months to two years before he is in America facing charges," Sullivan said.

Vancouver police spokesman Const. Howard Chow said Friday the Vancouver drug squad was involved in the investigation for the past 12 months, after U.S. DEA officials provided information about Emery's alleged dealings in the U.S.

Chow confirmed there were no Canadian charges laid.

Asked why Vancouver police hadn't arrested Emery earlier, Chow said that "simply because a person is selling seeds is not enough."

"It was a matter of priorities and resources."

"Once Vancouver's end of the investigation was done today, our members were notified and he was placed under arrest," Hobeck said.

Hobeck said Emery will be remanded until arrangements are made to transport him to Vancouver.

Emery's lawyer John Conroy, who had not yet spoken with his client, said he was preparing for the extradition defence.

"Presumably they are arresting him in order to extradite him to the U.S. to face charges there," Conroy said, adding that an extradition hearing would be based on Canadian law.

"The whole plant is unlawful to possess, but there are exceptions . . . for non-viable seeds and stalks, which I believe is mainly for the hemp industry," Conroy said.

"Viable seeds are prohibited, non-viables are not, but I think it has yet to be determined what that distinction is."

Last year, Emery pleaded guilty to trafficking marijuana -- after being caught passing a joint -- and was sentenced to 90 days in jail in Saskatoon.

The Vancouver property that was searched Friday is registered as the home of the B.C. Marijuana Party and does not have a business licence, according to City of Vancouver spokesman Paul Heraty.

"There's a bookstore and a Pot-TV [station] on site and we've accepted their claim that the profits from those two businesses go towards the political party," Heraty said.

According to the Marc Emery Direct website, it is the largest marijuana seed bank in the world, carrying some 534 strains from a variety of breeders.

Conservative MP Randy White said he was not surprised by the Hastings Street raid and arrests.

"Emery gets arrested all too often," he said, suggesting that the punishment for drug offences in Canada is often to weak.

"It's serious and that's why they [the U.S.] are doing something about it. Our government tends to sit back and wait for a catastrophe."

NDP MP Libby Davies said the arrests go against the views of most Canadians, who support decriminalization of marijuana. (A 2004 survey of 1,000 Canadians by SES Canada Research Inc. found 57 per cent were in favour of decriminalizing the use of small amounts of the drug. The survey is considered accurate within three percentage points, 19 times out of 20.)

"I think it's very disturbing that the Vancouver police department is raiding a local business and arresting people for the U.S. war on drugs," she said.

"It feels to me like the long arm of U.S. enforcement reaching into Canada."

- Warrant request: U.S. makes warrant request in B.C. court under a treaty that deals with matters under the Mutual Legal Assistance in Criminal Matters Act.

- Friday: Emery arrested in Nova Scotia where he is to attend Hemp Fest 2005 in Lawrencetown. Two others arrested in Vancouver raid. Hastings store searched.

- Next: Emery's extradition to U.S. will be sought. American officials expect a six-month to two-year process.