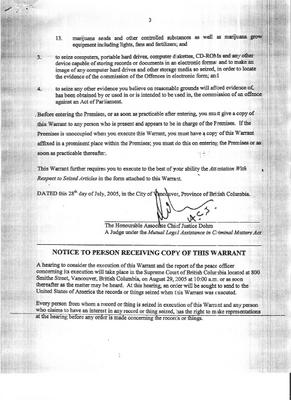 Canadian police acting under orders from US officials raided the headquarters of the British Columbia Marijuana Party (BCMP) in Vancouver today (Friday, July 22).
The search warrants were authorized at the highest levels of the provincial government in concert with a cross-border US-Canada law enforcement pact authorized by the a US-authored Mutual Legal Assistance in Criminal Matters treaty (MLAT) between the US and Canada.

The US has issued extradition orders for Marc Emery, who was arrested while traveling in Halifax to a hemp festival, as well as two others who work with Emery on television productions and other endeavours.

The DEA and other agencies are claiming that by selling seeds to pot-growing Americans, Emery is engaged in a criminal enterprise with the growers.
"Their activities resulted in the growing of tens of thousands of marijuana plants in America,” claims US federal attorney Jeff Sullivan. “[Emery] was involved, allegedly, in an illegal distribution of marijuana in [the United States.] He is a drug dealer.”
Vancouver police armed with a search warrant raided the legendary store in the heart of Vancouver’s “Vansterdam” district.

Chris Bennett, manager of Pot-TV who was onsite when the BCMP center was raided today, said he is particularly angry that Canadian police were acting as enforcers of American drug laws.

“They're taking him down to face charges in the United States of America, where sentences are much harsher that one would face in Canada," said Bennett.
Emery has been arrested for marijuana-related “crimes” many times before, but those other arrests involved local Canadian charges and jurisdictions. Today’s charges are far more serious because they involve US federal laws that stipulate mandatory minimum sentences of 20 years or more.
Last year, Emery served 90 days in a Saskatoon, Canada jail for passing a joint.

American officials are seeking Emery's extradition, which could take six months to a year. If they do seek to extradite him, he will become another high-profile cannabis activist seeking to fight off American attempts to prosecute him.

Renee Boje, whose husband works for Emery at BCMP, has been fighting for years to quash a US extradition order that seeks to take her from Canada to face prosecution for cannabis in America. Her legal costs have been funded by Emery.

According to witnesses, police have chained the BCMP doors, put barriers on the windows, and are dismantling the store to seize business records, seeds, computers, and other materials.

The raid took place at 11 am. As of late Friday afternoon, there was no official statement from Emery or any of those arrested with him.

If past behavior is any indication, however, Emery is likely to be unrepentant, and will fight the charges and extradition vigorously in front of judges and in the court of public opinion.

The law enforcement treaty (MLAT) that snared Emery and his compatriots is part of a global American network of treaties allowing the US to use foreign police agents to investigate and arrest foreign citizens.

MLAT’s help the US to violate civil rights protections and other constitutional protections that would normally be afforded to citizens by their own countries.
The first US bilateral MLAT entered into force with Switzerland in 1977. The treaties are seen as a powerful tool of US foreign policy and hegemony. Dozens of countries have entered into MLAT’s with the US since 1977, and the treaties are seen as a way for US police and prosecutors to arrest people no matter where they live, and even if they are not guilty of a serious crime in their home country.

The treaties favor prosecutors and police, and make it virtually impossible for defense attorneys to advocate for clients snared by MLAT operations.
MLAT’s have been criticized in other countries. Critics say US MLAT actions against foreigners violate international law, compromise human rights, and violate national sovereignty.

The Irish Human Rights Commission has complained about a US-Ireland MLAT that allows CIA agents to secretly question Irish citizens on Irish soil.
The MLAT signed by Minister for Justice Michael McDowell and the US Ambassador to Ireland James Kenny, gives sweeping powers to US authorities operating in foreign countries, including the right to seize documents, check bank accounts and carry out searches of property.

The Irish Human Rights Commission (IHRC) said it would be examining the agreement, which was pushed through with the promise that it would only be used to assist the US “war on terror.”

Human rights activists in Ireland are particularly concerned that interrogations can be carried out in secret, and that the costs of CIA operations in Ireland will be paid by Irish taxpayers.

The cross-border MLAT efforts sometimes involve enforcement of the United Nations Convention Against Illicit Traffic in Narcotic Drugs and Psychotropic Substances that was finalized worldwide on November 11, 1990.

It is possible that Emery and his associates would be charged with violating this Convention. In past years, UN officials have condemned Emery by name.
The raids leave many questions unanswered.

Although Emery is the highest profile marijuana activist in the world, who publicly airs reality television shows portraying all aspects of marijuana culture and who hosts marijuana connoisseur events like the Toker’s Bowl, he is by far not the only person selling marijuana seeds across international boundaries.

Vansterdam insiders note that while police were raiding Emery’s store on West Hastings Street in downtown Vancouver, other marijuana seed businesses were still open for business, and people were smoking marijuana while watching the raid.
The issue of selective prosecution is also raised by insiders who note that US and Canadian officials are aware of massive cross-border organized crime operations that involve guns, hard drugs, and other illegality on a scale that dwarfs Emery’s marijuana seed business. And yet it’s Emery, who donates all the money he earns to non-profit pro-marijuana causes, who is targeted in an unprecedented raid ordered by the US.

Protesters are on hand at Emery’s store in Vancouver. The man who has provided bail money, attorneys, and other support for so many marijuana arrestees now finds himself in the clutches of the US government which he, his magazine, and his website so accurately describe as a totalitarian and imperialist hit squad.
For the man who is often called “The Prince of Pot,” today’s arrest is the ultimate showdown.

After leaving jail last year, Emery said, “Once you get over your fear of whatever they can do to you, you become empowered to just live as if marijuana is legal, without much concern for the consequences they threaten you with. Whatever they do to me- arrest, incarceration, even if they kill me- it’s not going to make me live in fear. We’re going to continue to show them that marijuana should be legal, that our culture is harmless and vibrant, and that it is the drug war, not the cannabis culture, which threatens public order and safety.